New Video on Sauvage during Transpac

New Video on Sauvage during Transpac 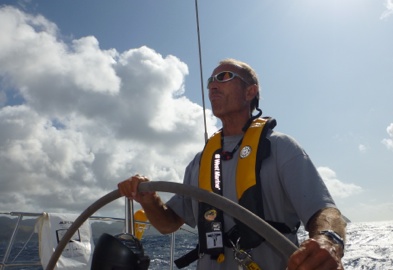 Mr. Jim Eisenhart and crew took to the Pacific and raced the VCG Sponsored, Sauvage to Honolulu in the Bi-Annual Transpacific Yacht Race.  Here is a short video of that journey.  Enjoy.

#1. Preparation is everything. As a team and individually, we spent over 6 months and most weekends either sailing, meeting or fixing/fabricating stuff for the boat. We also did several ‘preparatory’ races. The assumption was, stuff will break, things will go wrong,sails will blow out, lines will chafe thru. Just like a construction project. So either seek to prevent them as much as possible and then have a backup plan. We were fortunate, nothing major happened except that the head backed up about ½ way across. At 1AM in the morning. And on my watch. And, since I had rebuild the thing before, I was ‘the best qualified’ to fix it. Fortunately we had two (2) head rebuild kits on board. The lesson? Always have at least two porta potties on site.

BOM Board Exercise with team. The biggest BOM? Chafe or one of the lines, sheets, halyards or guys wearing thru.

#2. When ‘hot bunking’ after changing watch, always turn over the pillow of the guy whose bunk you’re taking. After a couple nights I really couldn’t smell the difference but it seemed to me to be a good idea to stick with. Also, “Buzzsaw” McKenna always followed me on watch which meant I had it easy two ways. Number 1, I could always find (hear) him even in the blackout conditions down below at night and, Number 2, I never had to listen to him sleep since he was always on watch while I was sleeping. Somebody did a great job of setting up the watch schedule. And, as on a construction project, scheduling is everything.

The nav station + someone trying to get some shuteye

Sunset at Sea on the Sauvage.

#3. Don’t criticize the food – someone’s wife made it. Actually the food, especially the frozen dinners pre-prepared by wives and crew were uniformly excellent. These were heated in a big pot of boiling water each night. I had the crafty idea of each crew labeling the white bowls we all ate everything from with their name. Shortly thereafter I dropped a bowl and chipped it. So from then on, according to the crew, it was ‘my bowl’. And with that, my labeling idea was also ‘dropped’. And no, we had to do without donuts ‘in the trailer’ in the morning. So, as on a construction project, don’t criticize the design, someone did it and his/her spouse is proud of it.

Prefrozen dinners which were stacked in Styrofoam coolers.

The bowls out of which we ate everything – sandwiches on paper plates.

Provisioning. Food and water – no showers — for 7 guys for two weeks.

#4. If you’re not achieving your goal, change your goal. We started with the goal to ‘win our division’. Well, after one day about 5 days into the race where we ‘sat in a hole’ in the ocean going virtually nowhere, we revised it to ‘not losing third place’. And, I might add, beating the boat which we initially considered to be our biggest threat, Between the Sheets. We did beat them which was neat because they had won the class on the two previous races. On long sailboat races, sometimes you’ve got to come up with your own definition of ‘winning’. Also, taking pity on ourselves as the ‘humble dirt farmers from the Oxnard plain’ gave us the underdog image vs. the ‘rich b_______d’s from Newport Beach’. Image is everything if you’re not winning. Much like during a construction project, if they don’t like what they’re seeing, refer them to the rendering.

The brain trust reconsidering strategy based on latest weather report and competitor intel.

#5. Without music, alcohol or sleep you have to be creative in amusing yourselves. Recalling advertising jingles from the 60’s, theme songs to 60’s TV hits, and the stars of 60’s TV shows, etc. helps. You’re getting an idea of how old we are = pretty old. For example, who remembers the star of the Rifleman? Chuck Connors. What was the theme song of Have Gun Will Travel? If you weren’t in your 50’s or 60’s you were at a decided disadvantage on this team. And I, as the oldest, would trump everyone by recollecting B&W shows from the 50’s like Sergeant Bilko and Spin and Marty. Remember, Spin was the cool one. Brylcream really worked – or at least so they told us back then. This reminds me of several of our jobs which were being build in the middle of nowhere – almost invariably a correctional institution. The project teams had to be creative in finding offhours diversions.

OK, ½ way thru the race or 1,200 miles from land, we celebrated with one beer per man. Tecates left over from Mexico that we found in a locker.

A double rainbow = a pleasant distraction…but what does it mean?

#6. Let the ‘artists’ do their thing. Before the turn of the 19th century when clipper ships were sailing around Cape Horn, the captains ‘who always found a way’ even when going the ‘wrong way’ (against the wind) were termed ‘artists’. Some of these captainswere legendary in reading the wind, seas and getting the maximum out of their vessels. We were fortunate enough to have quite a few of these guys on Sauvage. At the helm, for example, they could always get another ½ or ¾’s knot of boat speed than I could. It was alldone by feeling — not technique. Something like a great superintendent who’s able to reduce costs regardless of conditions by 5% vs. just a ‘good’ one. Don’t try to ‘motivate’ them. If they’re not motivated, they’re not on the team.

Me giving my motivational speech just before leaving – note inspirational sunglasses for effect. In reality the speech, of course, had ‘no effect’.

#7. No whining. There was nothing worse than putting your head on the pillow and just after you fell asleep to hear, “All hands on deck, sail change”. Sleeping in your clothes and sandals helps but stumbling about the dark cabin trying to remember where you put your harness and then going to your ‘station’ in a stupor got real old. Oh, and Chris, the guy who preceded me and who always woke me up for a watch change, became my worstnightmare. He was the nicest guy and would always very gently say “Jim, you’re up”. Even now recalling his face in the dark gives me the shakes.

Our secret weapon = “Hot Lips” our backup 2s spinnaker. I think it’s illegal in a couple of states.

#8. Don’t screw up the race/project in the last 6 miles. With Diamond Head in sight we were going pretty good in the 25+ knot wind. One of my teammates suggested that this would be a good time for the captain to take the helm. You know, for the photographers at the finish line. That’s what I call a good team player. While the conditions were challenging they weren’t anything like a couple nights ago when even Yosemite Sam, one of our best helmsmen, could barely hold on. I had but one thought as I took the wheel, don’t crash! Which meant don’t accidently jib – you could lose not only the race but the rig. Or, don’t ‘round up’ and put the boat on its side. It’s like the last 5% of a construction project is really what can really make or break a team.

Me driving = full concentration trying not to screw up.

#9. When the boat/project goes over on its side, stay with the boat, it will come up. About 100 miles out we were in the middle of a real rainy squall. None of the previous ones had produced winds over 20-25 knows so we just kind of enjoyed the rain. All of a sudden a gust of at least 30 knots hit us. Craig tried to fight the wheel, I let go of the mainsheet and Chris let go of the vang in a effort to ‘offload’ the gust but all to no avail. Sauvage went over on her side with the mast in the water for what seemed like 6 minutes. It was more like 6 seconds. Then she gamely came up, the spinnaker remarkably refilled by itself and she sailed on as if nothing had happened. Except that the guys in the cabin stuck their heads up and complained about the 10 gallons of water that came thru the leeward hatches ruining the lunch they were making. The automatic bilge pump took care of that in short order. The moral: Don’t give up if you’re knocked down. And don’t eat the soggy pizza.

#10. Don’t not commit to doing another race/project – at least until you’ve had a few Mai Tai’s and seen the pictures. Fortunately they only do the Transpac every other year. So you have two years to ponder whether you’d put yourself and your boat thru this again. And, of course, the older we get the more we forget. I just got the picture of us crossing the finish line with Diamond Head in the background — attached. It was taken by the committee boat a hundred yards away. Sauvage looks clean, she’s going fast andthere’s no smell. Kind of like some projects I know — after they’re finished. The photos, awards, relationships and bar talk – it’s all good. And you/we keep coming back for more! So don’t count us out for 2013. I’ve got to revisit those 50’s TV reruns. SO OK, HERE’S THE DEAL. IF YOU’VE READ THIS FAR AND YOU’RE THE FIRST PERSON WHO CAN NAME THE STAR OF “HAVE GUN, WILL TRAVEL”, I WILL MAIL YOU A SIGNED COPY OF MY NEW BOOK, “RAISING THE BAR ON CONSTRUCTION PROJECT TEAMWORK: FROM GOOD TO WORLD CLASS”. AND IT’S NO FAIR USING GOOGLE!
Finished!
Good Luck,