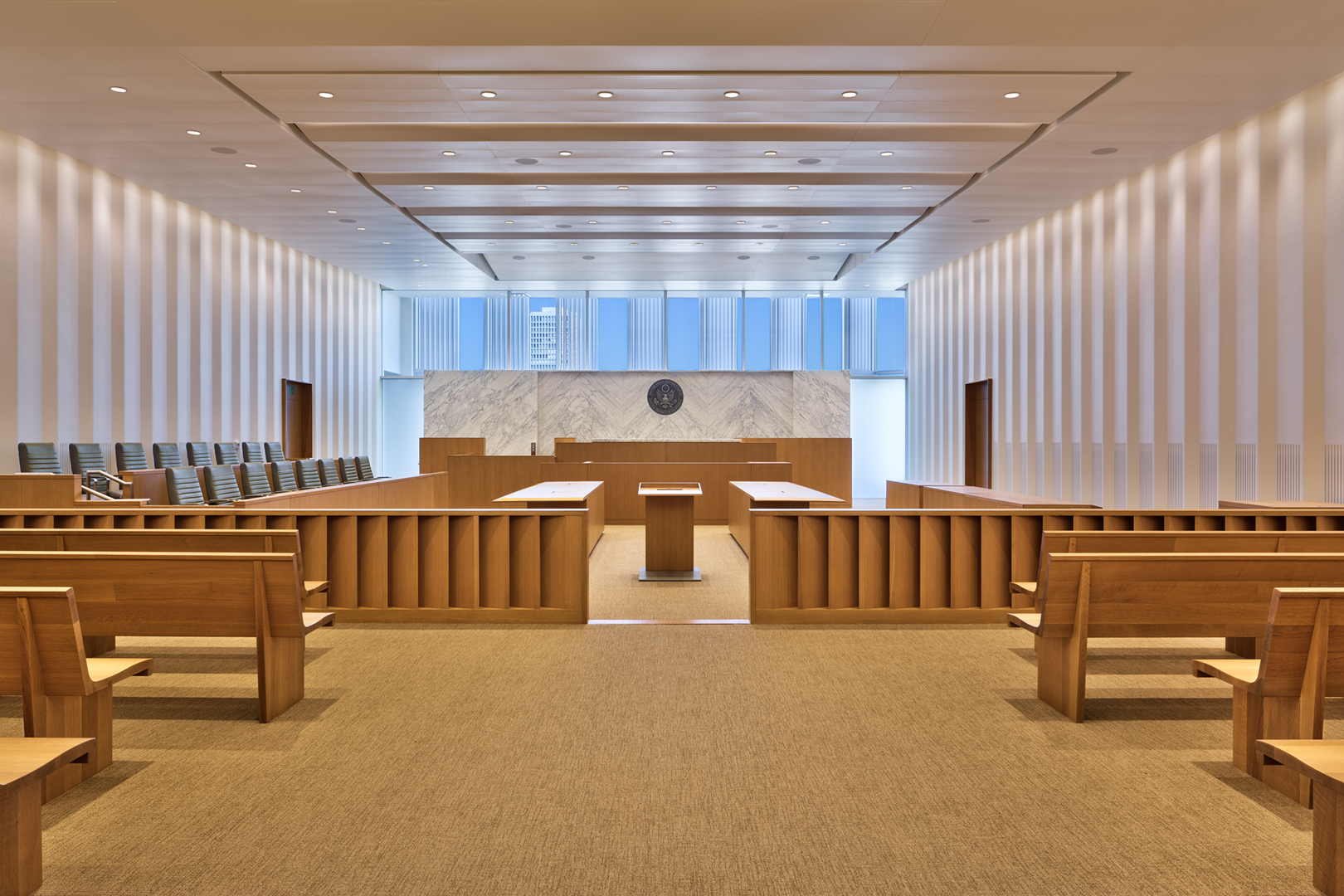 Congratulations to the world class project team on the official opening of the General Services Administration’s (GSA) new $350 million United States Courthouse in downtown Los Angeles. The design and construction team joined with local, state and federal public officials to celebrate this momentous occasion during a recent ribbon cutting ceremony.

Built by the design-build team of Clark Construction Group and SOM, the 633,000-square-foot project was substantially completed this past summer. Jacobs provided construction management services for the three-year long building effort, which features an innovative structural and eco-friendly design.

Consolidating many of the functions that were previously divided across multiple buildings, the 10-story courthouse contains 24 courtrooms and 32 judicial chambers, which will be used by the U.S. District Court, U.S. Marshals Service, U.S. Attorneys’ Office and the Federal Public Defender. The new building is anchored by one level of below-grade parking, as well as mechanical and back-of-house spaces.

A part of GSA’s Design Excellence Program, the civic-minded structure is shaped like a cube which appears to float above its stone base and the courtyard below. Targeting LEED Platinum certification, the building features a serrated curtainwall façade that maximizes daylight and views while reducing solar heat gain by nearly 50 percent. Some of the project’s other sustainable elements include: roof-mounted solar panel arrays, high-efficiency building systems, water-efficient fixtures and advanced irrigation systems, including a 105,000-gallon underground cistern used to collect rainwater for irrigating drought tolerant plants.

Meeting the building’s complex design goals while obtaining the highest level of value for the publicly-funded project was paramount to the team’s success. Facilitated by Paul Crotty of Ventura Consulting Group, the project’s partnering program helped foster a collaborative environment built upon teamwork and trust, which enabled the team to meet these objectives and more.

“Partnering provided a safe venue in which concerns could be expressed honestly and openly with others respecting the position being presented,” said Charlie Atkinson, Senior Project Manager of Jacobs Project Management. “Through this process, the entire team was able to work together to determine the most effective means of resolving an issue, ensuring the solution was one that that served the project best. Addressing the project’s needs first was always the top priority.”

Among other innovations, the team converted its BIM model into an immersive three-dimensional experience using virtual reality technology. Combined with traditional physical mock-ups, this technology allowed the team to virtually walk through the intricately designed rooms to see how its many interior elements affect and interact with each other. Enabling the team to make important design revisions prior to construction, this cost and time-saving innovation proved especially useful when constructing 24 identical courtrooms that had to be completed in just 12 weeks.

Featuring an innovative structural and eco-friendly design, the LA Federal Courthouse is shaped like a cube which appears to float above its stone base.

Facilitating collaborative solutions such as the virtual mock-ups discussed above, seven Partnering Workshops were held with representatives from GSA and the design-build team over the course of the project. During the first workshop, the team shared expectations and established common partnership goals related to the building’s iconic design, positive post occupancy satisfaction, community outreach, budget, schedule, sustainability, safety, quality, security and teamwork.

“We updated the goals at each partnering workshop to ensure the various team members worked toward the same definition of success,” said Crotty. “Expectations can change over a project, and partnering enables the companies involved to raise the bar and strive for greater success, or adjust their expectations, depending on the real-life circumstances of the project.”

Representatives from each of the companies involved in the project also completed monthly partnering surveys to evaluate the team’s progress toward achieving its partnership goals. This effort helped keep all team members aligned and on track.

“This team started with strong and capable players, but just because you have good individual team members does not guarantee they will work together for the best of the project,” explained Crotty. “What impressed me most about the L.A. Federal Courthouse team was how they collectively developed solutions for the project’s unique challenges, consistently found ways to function more effectively and efficiently as a team, and truly had a ‘project first’ mentality. The project team built a world class facility, because they were committed to achieving this goal as a world class team.”