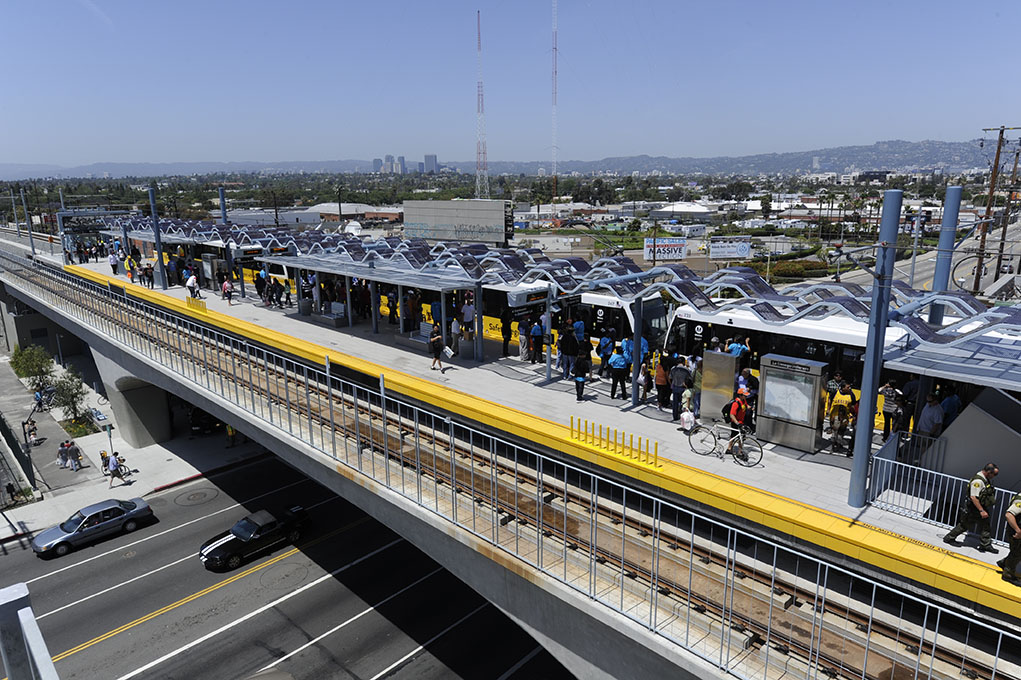 Jim Eisenhart, President of Ventura Consulting Group and author of “Raising the Bar on Construction Project Teamwork” specializes in a method for Partnering that simplifies large, complex projects such as airports, railways, and hospitals. He calls it “Derivative Partnering.” Derivative Partnering involves shorter and generally smaller sessions where key players meet to discuss specific goals and concerns. The full team comes together for a General Partnering Session once a year and the Executive Partnering Team meets on a quarterly basis. Derivative Partnering is a way to strengthen teams and partnerships on challenging Mega Projects like the Exposition Phase II Light Rail Project by helping them engage third parties, improve processes, and reach key milestones.

Eisenhart’s philosophy of achieving world class results encourages teams to develop innovations like Derivative Partnering, which came about three years ago during the Exposition Phase II Light Rail Project. The owner on this Partnered project, valued at 610M, was the Los Angeles County Metropolitan Transportation Authority (Metro). The prime contractor was Design-Build Joint Venture Skanska-Rados, and the designer was WSP | Parsons Brinckerhoff. Using Derivative Partnering, the team was able to be more productive, maintain Partnering momentum, and work with third parties like Southern California Edison (SCE) and Los Angeles Department of Water. Without the innovation of Derivative Partnering on this project, estimates Mike Aparicio, Executive Vice President of Skanska, the project would have been 18 months late. In total, the project spanned four years and seven months. The team came in on budget with no claims and won a 2016 Ruby Level IPI Partnering award in the category of Transportation Mega Projects.

Typically two hours in length, Derivative Partnering sessions are shorter than General Partnering Sessions—but that does not make them less productive. Uniquely, several teams can be organized at once, meeting during separate sessions to fulfill different objectives. Eisenhart emphasizes that “[Derivative Partnering sessions] have to be short and hard hitting.” That means the team should look at “goals, action planning, who can contribute, and then move on.” Each Derivative team develops its own issue resolution ladder and looks ahead at what it can accomplish in the next six months. Depending on what is deemed necessary to help reach a key milestone, derivative sessions may be held as frequently as once a month. The Exposition Phase II Light Rail Project team held 65 sessions.

While engaging with third parties has historically been considered a challenge for teams on Mega Projects, it is a strength of Derivative Partnering. Derivative partnering came about as a solution for addressing a large concern and a question of “what if.” “What if we bring everyone together?” Eisenhart recommends that teams look for the critical relationships and third party entities from the beginning, and seriously discuss their concerns about the project along with those of the owner and the contractor. At an airport this includes the TSA, the FAA, and Concessions. For a Railway this includes cities and utilities.

During the Expo Light Rail Part II Project there were two Derivative Partnering sessions held with the cities of L.A and Santa Monica. These were essential to cultivating a partnership.

“What evolved was an understanding with workshop participants that the JV and EXPO would listen to and respond beyond any contractual requirements to city concerns re. noise, dust, traffic. But it worked the other way as well. If the JV wanted to do, for example, some night work, the cities would go out of their way to accommodate the JV and EXPO.”

Working with cities is one thing, but is it farfetched to say that utilities can actively support project success? Not according to Eisenhart, who has seen how successful Derivative Partnering has been in that area. To change the relationship, it is important to ask utilities a question that they aren’t used to hearing: “What would make this project an extraordinary success for you?” Doing so allows utilities to work directly with the contractor and gives them the opportunity to make requests—such as for a replacement that is not in the specs, or for a no-cost change. By bringing them into Derivative Partnering sessions, speaking to them face to face, and getting to understand their point of view, the team can take their perspective into account and accomplish more.

Derivative Partnering can expedite the design submittal process, which again ties into engaging with third parties. Having a discussion about betterments, design submittals and how they should best be formatted saves the Design-Build team the unnecessary time and effort of sending multiple revisions back and forth. Furthermore it recognizes utilities as part of the team. “Work together, help each other out,” says Eisenhart, rather than just “dumping stuff on the desk.” When they know their voice is being heard, utilities will see the value of Partnering and request another session.

Derivative Partnering helps teams accomplish more by keeping sessions smaller; bigger is not always better. When there are too many people in a partnering session, “It gets more unwieldy,” says Eisenhart. Large partnering sessions can make people less engaged in the collaborative process because the session begins to feel more like a presentation, or because it takes too long before each person can contribute. That’s where Derivative Partnering can help.

“Some issues only involve about ten people,” Eisenhart points out. “Get everyone in the room who can contribute to completing that milestone.” The shortened, targeted approach helps teams to zero-in on a key milestone and strategize toward success.

In the end, while Derivative Partnering sessions can still involve more than 35 people, a number that includes top management, everyone there is focused and collaborating on a specific task, looking to make the most of their time. It makes sense then that Eisenhart would hold a timed challenge halfway through the sessions to get everyone brainstorming.

The attendees are split into four to five groups to come up with creative ways to better achieve project milestones. After seven minutes are up, everyone votes for the best idea. The Phase II Light Rail project team describes the challenge as a fierce competition: “not because of the small reward, but because the team knew how important this was to their common goal of doing the best they could for the project.”

The strengths of Derivative Partnering point to it as being essential for Mega Projects. Being able to work with utilities is a great asset for a contractor, and for overall project success, but also something that is difficult to achieve. Lasting three or four years, these projects find it hard to maintain Partnering with so many stakeholders. Derivative Partnering addresses both of these challenges. By having smaller groups that are incredibly focused and involve all the right people, teams can better engage with third parties, improve processes, and reach key milestones—putting themselves on the path to world class results.

This article was originally published in Partnering Magazine and is reprinted with permission from the International Partnering Institute.