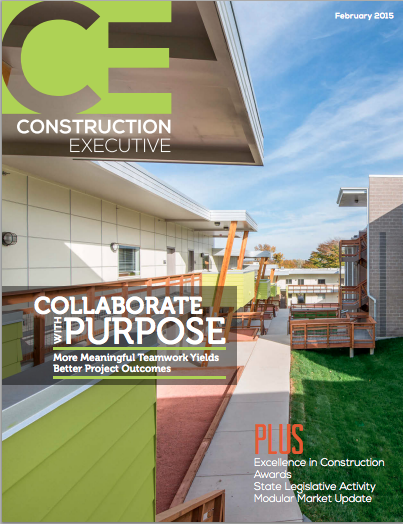 Partnering has become quite standard as a way for public sector owners such as the General Services Administration, U.S. Army Corps of Engineers and Caltrans to preclude litigation with design and construction teams—even as the industry has embraced more negotiated work and collaborative project delivery methods.

“In the last 10 years, we have discovered there’s a distinction between good project teams that finish on time, on budget and with no unresolved claims versus world-class teams that produce results beyond the contract requirements and specs,” says Jim Eisenhart, whose California-based Ventura Consulting Group facilitates workshops that bring together project owners, contractors, designers, subcontractors and third parties. “Particularly when public sector owners had a choice with whom they wanted to work, the choice had a lot to do with the contractor’s reputation. Just being a good design-builder is no longer enough. You need to strive toward a higher level of teamwork and results in order to earn repeat business.”  Jim Eisenhart

Partnering is a process as well as a mindset. On the process side, the team designates, documents and measures goals, as well as prioritizes verbal or in-person communication over emails and letters. The mindset aspect is equally crucial. It’s a shift from going to the job every day and trying to squeeze every dollar out, to showing up and speaking candidly with one another in order to reach mutual goals that inevitably will result in profit. In other words, people agree they will talk to whom they need to talk to in order to get the job done; the formal structure fades away and people work on the basis of common goals.

“Instead of playing not to lose, which isn’t very inspiring, partnering is about playing to win. Everyone puts their efforts into achieving extraordinary results,” Eisenhart says. “As one of our clients says, you need common goals that, when achieved by the team, trump every stakeholder’s personal agenda heading into the job. The challenge is knowing the team has done its best given the circumstances at the outset and during the job.”

According to Eisenhart, world-class teamwork can be achieved regardless of project delivery method or circumstances (e.g., personnel or site conditions) so long as each stakeholder’s senior management team is committed to the process. If that commitment remains intact, a world-class partnership can emerge in as little as five months.

Subcontractors play a key role in the partnering process. They are considered an equal player, not just a third-level entity that reacts to directions from above. They can communicate directly with owners and general contractors, who will listen to their needs and suggestions.

On one design-build airport project, Eisenhart let subcontractors take the lead during a partnering workshop to ascertain what they needed to help expedite the balance of the job. They requested access to certain areas, faster permitting and other things that generally were easy to accommodate.

“It’s a matter of being told to comply with a set of specifications versus being sought out for ideas to expedite completion of the job based on their creativity,” Eisenhart says. “Other stakeholders are counting on them to make the job successful. It’s not like the old days when you could just submit a low bid; how you play with others is a key determinant in whether you get work again.”

It’s also important to ask questions such as: What would make this job an extraordinary success for the owner? Sometimes the answer is as simple as only closing a street during certain hours or maintaining access to a building during the holiday months—things that don’t typically appear in a contract.

On one hospital job that was running late due to owner changes and unforeseen conditions, the project team brought in key medical staff to determine immediate priorities. The doctors wanted the operating rooms’ HVAC equipment up and running, which the contractor committed to doing within three months. This strayed from the contracted scope and the project still finished late overall, but the job ended up being a success from all stakeholders’ perspectives.

“By meeting needs like this, the owner is delighted and the contractor has a real ally on the job,” Eisenhart says. “Partnering creates an opportunity for teams to express their collective creativity and their real needs face to face, and then follow through on those commitments. Alternative project delivery methods facilitate this, but don’t inherently guarantee it.”

Click here for a link to the article in Construction Executive