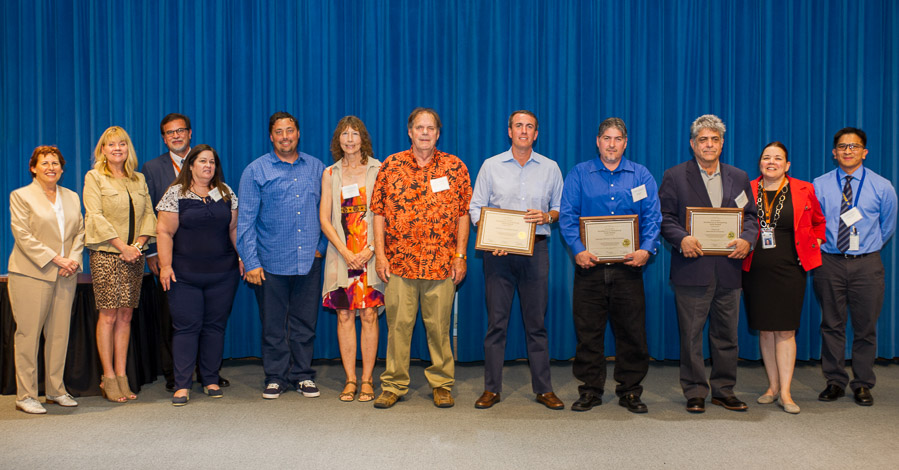 Read on to learn why the following VCG-facilitated projects were among those honored. 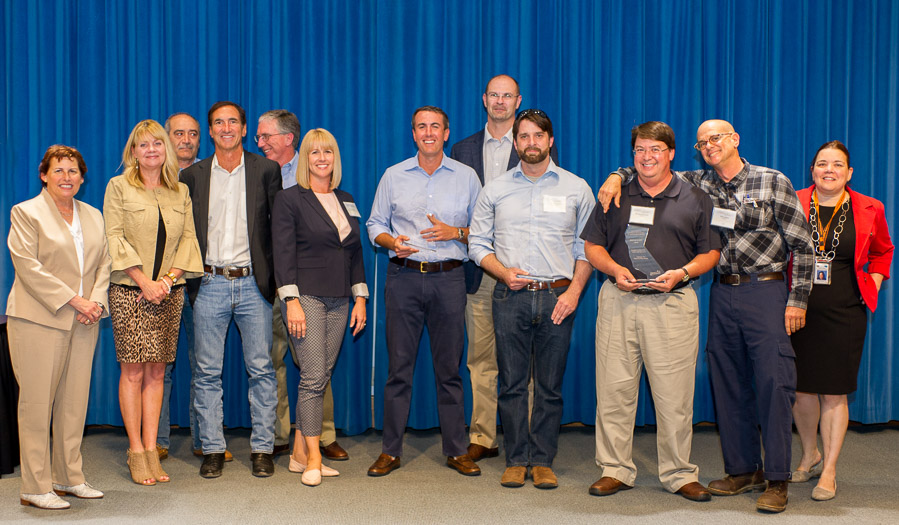 Best in Class Award for Projects Greater than $50M

“The ability to quickly and smoothly resolve challenges, while finding ways to reduce costs without sacrificing quality, is a sign of a great partnership.” This is what Caltrans representatives had to say about the Highway 101/Petaluma Bridge project, which recieved the highest Partnering award given by Caltrans during this year’s Excellence in Partnering Awards ceremony.

Touted as one of the longest precast, post-tension splice concrete girder bridges in the U.S, the new bridge is located on Highway 101 where it crosses over the Petaluma River in Sonoma County, California.

Aiming to lessen traffic congestion north of San Francisco, the $78.6 million project included construction of a new 907-foot-long, six-lane bridge, which replaces a four-lane bridge built in 1955. In addition to the bridge replacement, this project involved construction of the Kastania Road Overcrossing, four new ramps, two frontage roads, seven retaining walls, and the overall raising of the highway for site-distance improvements.

A major challenge faced by the project team, was conforming and restaging this contract with an adjacent project that was designed independently of the Petaluma Bridge project. Working in close partnership with one another, the two teams devised creative engineering and scheduling solutions that allowed the two projects to proceed logically and eliminated the need for certain temporary facilities.

Further challenges requiring strong collaboration between Caltrans and the JV team emerged upon start of the project’s second retaining wall. Issues ranged from unsuitable soil to conflicts with third party utilities. To mitigate potential delays, the team developed a clever detour, which removed the wall from the critical path and allowed for a major embankment operation to proceed in the new median. The implementation of a Dispute Resolution Ladder enabled the project to proceed on normal terms without any distractions from the potential claim.

A notable success story on this project included an extensive public outreach effort by Caltrans, Sonoma County Transportation Authority, and the JV, as well as coordination with local authorities for detours related to complicated freeway closures. Caltrans’ IPO and SCTA’s project manager went well beyond what could be expected in terms of outreach. The net result was a well-informed public with very few project-complaints.

State Route 58 is a major connector from Bakersfield to eastern California desert locations. However, the expressway was reduced to two lanes in the city of Hinkley, near Barstow. This project provided a solution to the traffic bottleneck in this area by realigning and widening the expressway to four lanes. Accessible from two bridges, this expanded roadway provides safe access and facilitates mobility for all motorists, particularly Hinkley area residents.

Completed approximately $7.4 million under budget, on schedule and with no safety incidents, best Partnering practices included: the development of a formal Partnering Charter, Evaluation Surveys and Dispute Resolution Ladder, as well as weekly team meetings and regular barbecue events.

During the first Partnering Session, the team established a Dispute Resolution Ladder to address state-mandated water usage requiring construction of the project’s 90% compacted fill zone without water—an impossible task given the dry soils in the high desert. The team cooperated to create a dry compaction test program proving compaction without water was indeed impossible. Consequently, the specification was changed to allow water use without significantly impacting the schedule.

Among other challenges, effective logistic planning was required to safely import 2.6 million cubic yards of fill through an archaeologically and biologically sensitive area with limited access points. Caltrans Environmental, Traffic Design, Traffic Operations, and Construction, as well as Skanska-Teichert JV, San Bernardino County, and CHP, collaborated to establish two separate haul routes. Despite numerous constraints, the plan allowed the project to remain on schedule without greatly affecting the public.

Managed with a “project-first” focus, the project team at Caltrans and the Skanska-Teichert JV always met face to face to discuss solutions before any correspondence was sent. This and other partnering practices built significant trust and allowed the team to find solutions that best benefited the project, instead of positioning for claims in the future.

I-210 Pavement and Median Barrier Replacement

Silver Award for Projects Between $10 and $50 million

During the project, a dispute arose whether to pin the k-rail dividing traffic. By working together through the Partnering Process, a more productive and less destructive solution was uncovered. Furthermore, by working as a unified team, alternatives were found to reduce long-term ramp closure durations and minimize impacts to local residents and businesses.

Congratulations to the project teams above and the rest of the award-winning projects. According to Caltrans, the Partnering programs these teams implemented were instrumental in producing the following results:

SAFETY: 16 out of 20 Projects had Zero Lost Time Accidents

BUDGET: 15 out of 20 Projects Came Within or Under Budget- Total Savings – $11 Million

These accomplishments are a true-testament to the advantages a well-executed Partnering program provides.