“This is a project that all of its stakeholders will look back on for the rest of their careers as the gold standard in collaboration and overcoming monumental challenges, together.” – Paul Crotty, Ventura Consulting Group

The $823 million Calaveras Dam Replacement Project in the mountains east of San Francisco Bay reached its full height in September 2018 and is nearly ready to begin impounding water. The project milestone was marked by a ribbon cutting ceremony and media event. 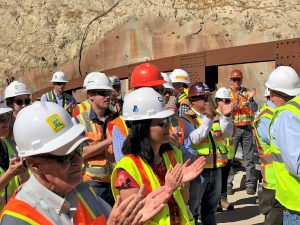 Built to replace a 93-year-old dam of the same size, the new structure now stands 220-feet high, 1,220 feet in crest length and 80 feet wide at its crest. When full, the Calaveras Reservoir can store 31-billion gallons of water, making it the largest Bay Area reservoir in the San Francisco Public Utilities Commission’s (SFPUC) Hetch Hetchy Regional Water Systems, where approximately 85% of the surrounding area’s water is sourced.

Due to concerns about its seismic reliability, the reservoir volume in the existing dam has been kept to 40-percent capacity, or less, since 2001. Located approximately 1,500 feet away from the Calaveras Fault, which can produce earthquakes in excess of a 7.0 magnitude, the replacement dam along with its new ancillary facilities –including the intake tower, outlet works and piping, and maintenance buildings — was designed to withstand a major earthquake.

While crews have much work to finish before the project completes in spring 2019, once water is restored to its historic levels, this vital resource will provide a significantly safer and more reliable source of water for 2.7 million people in four Bay Area Counties.

Construction on the Calaveras Dam Replacement Project began in August 2011 with construction of the embankment for the new dam following in May 2016. Consisting of seven zones comprised of different materials, the new zoned earth and rock fill dam was constructed immediately downstream of the existing dam. The seven zones were placed foot by foot, like a layer cake turned on its side, for two years.

As one could anticipate for a project of this magnitude and complexity, the Calaveras Dam project was plagued by challenges, some of which included torrential El Niño downpours, naturally occurring asbestos and ancient artifacts uncovered while the project was already underway. 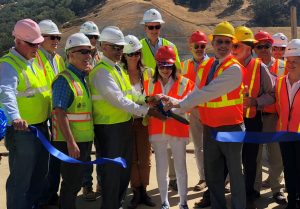 “All projects have challenges, and the more complex the project, the more obstacles a team will face, says Crotty. “The Calaveras Dam Replacement project had challenges that would have broken most teams.”

He explains further: “Upon hitting multiple, major differing site conditions, this team could have easily retreated into their contracts, postured and fortified their positions to get ready for the inevitable legal battle.  Instead, they utilized the Partnering process to find ways to collectively resolve the major issues and built trust, teamwork and project results that highlight the success of this team.

“While the project had budget and schedule challenges by no fault of their own (pun intended, the differing site conditions were seismic in nature), they have become a world class team and have built a world class project.  This is a project that all of its stakeholders will look back on for the rest of their careers as the gold standard in collaboration and overcoming monumental challenges, together.”

Congratulations to the entire project team!