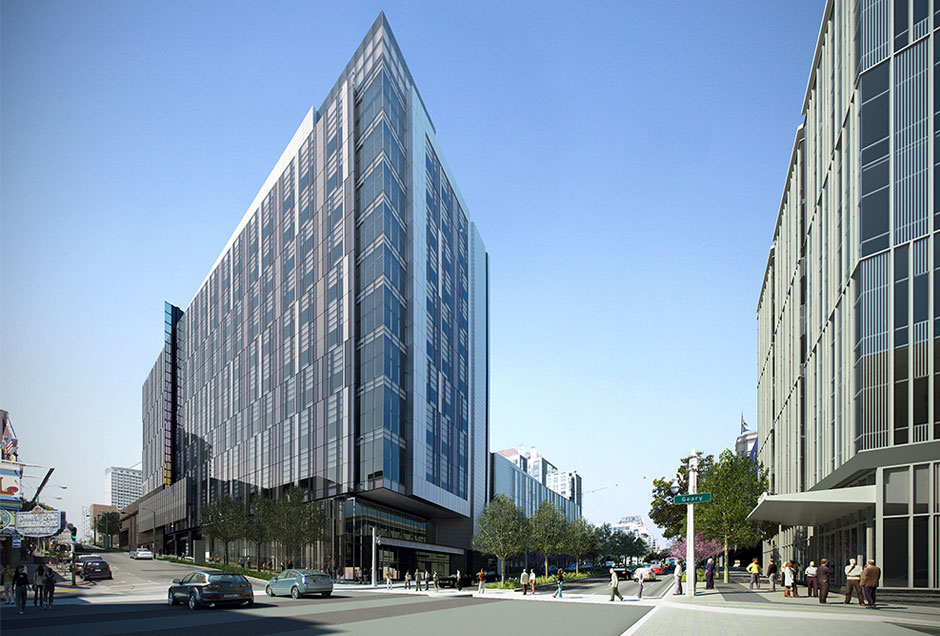 $1.5 billion hospital for Sutter Health California Pacific Medical Center in San Francisco is ahead of schedule, allowing for an early opening in 2019

Despite unique building challenges, the project’s enormity and multiple stakeholders, the $1.5 billion hospital for Sutter Health-California Pacific Medical Center (CPMC) at Van Ness and Geary in San Francisco is on schedule for an early completion. Not only that, the relationships built among the project team are leading to future work, bringing value to all parties and helping their businesses thrive.

Being built by HerreroBoldt, a partnership of Herrero Builders and The Boldt Company, the new Sutter Health-CPMC project at Van Ness is one of three hospitals Boldt has been awarded or under construction in the Bay Area for the same health system. Recently featured in the Post-Crescent, Boldt announced that in 2016 the firm reached $1 billion in revenues for the first time in its 127-year history. According to Bob DeKoch, president and COO of Boldt, healthcare is the company’s largest customer.

Since the project’s inception, team members led by Herrero General Superintendent Mike Price, including the owner, architect, general contractor and subcontractors, have participated in 11 partnering workshops with one more to go before the project completes.

“With help from Jim Eisenhart, the team has gone far beyond the coordination and cooperation efforts found on a typical project,” said Price. “Our team is dedicated to continuous improvement, trust, proactive thinking and true collaboration. We swarm issues with the right members to make quick decisions, and have a deep personal commitment to the team and project.”

Along with construction partnering, the team of Sutter Health, SmithGroupJJR architects and HerreroBoldt is using the latest in project management methodology and techniques, including target-value design, Building Information Modeling (BIM) and advanced approaches to Integrated Lean Project Delivery. The project team has already won an Autodesk 2016 AEC Excellence Award for its use of connected BIM technologies.

Averaging more than 600 workers on site each day, the project entails construction of a 12-level, 990,000-sq. ft. acute care hospital, with room for expansion from 274 beds to 304. Once it opens in early 2019, the cutting-edge facility will feature specialized and advanced healthcare services, along with emergency care.

Catalyzed by state mandate requiring hospitals to meet more stringent earthquake safety standards, the hospital is being built on a sloped site, posing unique challenges. Building innovations such as the use of 120 seismic “viscous wall dampers” — the first hospital in the U.S. to incorporate this technology — were developed by the project team. Incorporating this relatively new technology not only improved the building’s seismic performance but also reduced steel tonnage by 33 percent.

Located on one of San Francisco’s busiest intersections, site access presented further challenges. Additionally, the design called for construction of a tunnel under the main route through San Francisco, as well as the removal of an existing 11-story, concrete hotel that occupied the site. The team successfully managed and orchestrated both obstacles, implementing solutions that significantly reduced fuel and time waste from truck idling while removing 130,000 yards of fill from the site. Construction of the tunnel was also completed ahead of schedule over three strategically planned weekends, shortening road closures and lessening public inconvenience.

During the initial partnering workshop, the project team established seven common goals related to schedule, safety, quality, budget, team relationships and public impact. An action plan with the parties responsible, tactics and due dates were established. Since that time, the goals have been monitored through monthly partnering surveys and at subsequent partnering meetings.

Congratulations to The Boldt Company on reaching the $1-billion revenue mark, and to all project stakeholders for their commitment to the Sutter Health-CPMC at Van Ness project, as well as to each other. Your exceptional partnership and hard work is manifesting in many positive ways, primarily a healthier Bay Area community through the world class hospital you are producing for Sutter Health.